Where in Mazatlán do you have a 360º view and can you see 12 miles north and south? It’s not the newest apartment building in town, but a natural reserve that few tourists know about. The Lighthouse or ‘Faro’ is home to many animals and plant species and is located in the far south point of Mazatlan. Named the world’s 2nd highest natural lighthouse, its altitude is 154 meters or 490 feet.

The Mazatlan lighthouse is located on an impressive rock formation called the Creston Hill. From afar you can appreciate its steep cliffs and triangular shape. The Creston hill boasts several deep caves, which are nearly impossible to approach because of the treacherous currents. 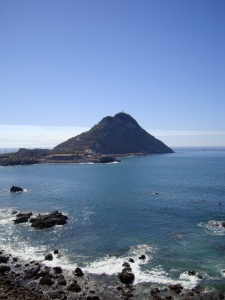 Mazatlan has been a cargo port since 1821, but at that time it didn’t have a lighthouse. The most important freight was gold and silver from the rich mines of Copala and Cosalá. Many ships came in from Europe and Asia, but entering the port was a dangerous enterprise. The captains would have to approach the port based on their experience, which put at risk their ships and precious load. Therefore the Creston hill, which used to be an island, was equipped as a reference point using torches or wood fires. It wasn’t until the 1890 that the actual lighthouse was built. The maritime signals had been manufactured in Paris, France, and consisted of a large oil lamp with mirrors to reflect and enhance light. Because the light was static, in the distance the light was often mistaken for a star. It was not until 1905, when the lamp was replaced by a turntable.

There are several interesting legends about the lighthouse caves. Some stories lead to believe that inside invaluable treasures have been hidden by famous pirates like the English Thomas Cavendich or the blond Dutch Spilbergen. They roamed the seas to plunder the loaded ‘Naos’ from the Philippines.

Climbing or ‘conquering’ the Lighthouse is a great adventure for all ages. I always take my children (aged 5 and 8) for an early Sunday stroll. You will have an easy start with a slightly sloped sand path. You will meet both exercising Mazatlecans and tourists along the way. About halfway the sand path leads into stairs. You will see lizards, many birds, butterflies, as well as cactus and tropical trees. Even two stray cats roam the Lighthouse stairs, where they are fed daily by the passers-by. Once you’ve reached the top of the hill, you will be amazed by the view. It makes the effort worthwhile!

Are you excited and you can’t wait to visit the Lighthouse?!? Here’s how to get there. You can take the ‘Sabalo Centro’ air-conditioned bus that drives through the Golden Zone all the way to the foot of the Lighthouse. You can also take a taxi, asking the driver for ‘El Faro’. I would advise to arrive early in the morning or late in the afternoon to avoid the heat. Make sure to bring a camera, closed shoes, a hat, sunscreen and lots of water. You will have the best family time and the most amazing photos!!!